A collection of Fijian relics are included in the Charterhouse two day June auction on 20th & 21st June.

“The market for Fijian war and other clubs remains very strong with international buyers bidding live on the internet looking to add items into their collections.” Commented Richard Bromell. “These beautiful hand crafted clubs and other items are today more likely to be put on display in a modern chic loft apartment rather than a country house due to their naïve charm and wonderful patina which fits in perfectly with 21st century interior design.”

Two microcars are expected to sell for thousands of pounds when they go under the Charterhouse hammer in their auction of classic and vintage cars on Sunday 23rd June.

“Microcars have for many years been overlooked by collectors and generally regarded as a poor man’s mode transport.” Commented Matthew Whitney. “However, that has all changed in the 21st century as the microcar market is hot to trot with people recognising their quirky design and unusual looks.”

A silk scarf, owned by icon and humanitarian Audrey Hepburn is going under the Charterhouse hammer in Sherborne on Friday 21st June.

“Rarely do items belonging to star of stage, screen and fashion icon Audrey Hepburn come on the market.” Commented Richard Bromell. “This is due to fans and collectors keeping their treasures safe just like our client who has owned the scarf, photographs and letters for the past 56 years.”

Actress Audrey Hepburn was born in 1929. She lived abroad and studied ballet moving to London in 1948 where she continued her ballet training and started performing as a chorus girl in West End productions. Having had minor parts in several films she starred in the Broadway play Gigi in 1951.

In 1952 she shot to stardom for playing the lead role in Roman Holiday, for which she was the first

A necklace, in its original heart shaped box, is one of the lots going under the hammer in the Charterhouse 16th & 17th May auction of silver, jewellery and watches.

“Charming is probably the best way to describe the necklace” Commented Richard Bromell. “However, just as important as being charming is the necklace is very wearable and still looks stunning today in the 21st century.”

The necklace dates to the Edwardian period. Although unmarked gold, it is probably 15ct gold set with seed pearls and peridots in the Art Nouveau taste.

At over 100 years old it has survived in remarkably good condition. This is probably due to it being cherished and put away in its beautiful heart shaped box after being worn.

Inherited some time ago, the family who live in Somerset have decided it is not something they will wear and called upon

“Red has been one of the most popular choices of colour over the years and within the trade it is often referred to as re-sale red such is its popularity.” Commented Matthew Whitney. “Although these two sports cars were built 54 years apart, they both offer drop top motoring in iconic brands in racing red which will generate plenty of smiles per miles!”

The studio archive of pictures by late Victorian and Edwardian artist George Hodgson are included in the Charterhouse two day auction on Wednesday 17th and Thursday 18th April.

“It is a fascinating look into the development as George being an artist.” Commented Richard Bromell. “There are technical still life drawings through to designs for book illustrations and he also give a glimpse of how life was lived at the turn of the 20th century, albeit viewed through romanticised spectacles!”

Being sold by a distant family there are over 50 pastel, charcoal and watercolour drawings. This archive of George Hodgson pictures, which come from a deceased estate in Dorchester, have never been on the open market before and were stored away in a an old trunk which has resulted in them retaining their bright and fresh original colours.

A small group of books from the personal library of William Moorcroft, one of the country’s leading early 20th century potters, are going under the hammer in the Charterhouse two day auction on 17th & 18th April.

“It was a piece of Moorcroft pottery which I fell in love with as a young saleroom porter 34 years ago.” Commentated Richard Bromell. “Ever since then I have had a keen interest in Moorcroft along with half of the country it appears as it is so popular.”

William Moorcroft was born in Burslem, Staffordshire in 1872. He studied art at Burslem, London and Paris. In 1897 he joined James Macintyre as a designer and within a year he was overseeing the company’s art pottery studio where he developed his hugely successful tubeline decorated Florian wares.

A group of Chinese censers are estimated to sell for thousands of pounds in the Charterhouse specialist auction of Asian Art on Thursday 18th April.

“The Chinese bronze incense burners were just used as decoration in the owner’s house rather than being as they were designed.” Commented Richard Bromell. “Which was just as well with there being four incense burners in one room they would have certainly created quite a strong smell.”

Chinese incense burners have been around for over 2,000 years. They are used for burning incense which would perfume clothes, bed clothes and even kill insects and were made in a number of materials including jade, agate and bronze such as the ones entered into this Charterhouse auction.

The incense burners were acquired by an ancestor of the owner. Towards the end of the 19th century the family worked in the consular service in China and would have been acquired then. Moving forward to 2019 this is the first time they have been offered for sale in over 120 years.

The owner, who lives near Dorchester, took advantage of the home visit service Charterhouse offers clients looking to enter items into their range specialist antique and collector’s auctions.

Entered into the Charterhouse April Asian Art auction on Thursday 18th April, the group of four Chinese censers are estimated from £100 to £1,500, which pleasantly surprised the owner.

A Chinese bronze incense burner in the form of four peaches £800-1,200

A Chinese censer and cover, with unusual rat handles, and associated stand £100-150

A group of paintings by Fred Yates are estimated to sell for thousands of pounds when they go under the Charterhouse hammer in their April 17th auction.

“Fred Yates is one of Cornwall’s most loved artists of the late 20th and early 21st centuries.” Commented Richard Bromell. “He was a self-taught artist who liked to paint with bold colours and loose brush strokes painting almost exclusively outdoors.”

Fred Yates, often referred to as Fowey’s happy Lowry. Born in 1922 he died in 2008 having served with the Grenadier Guards during the Second World War. After the war he lived in Manchester where he painted very much in the style of Laurence Stephen Lowry, although

he strove for recognition in his own right.

By 1970 he was living as an artist in Fowey, Cornwall. Painting scenes of local village life, clifftops and beach scenes his paintings are today in museums and private collection not only in the UK but also in America, Canada and France.

The pictures being sold by Charterhouse were bought by a West Country collector over the past 20 years. They include scenes of

Charterhouse are now accepting further entries for this April two day auction of pictures, books and sporting items on Thursday 17th and Asian Art & antiques on Friday 18th. They are also accepting entries for their April 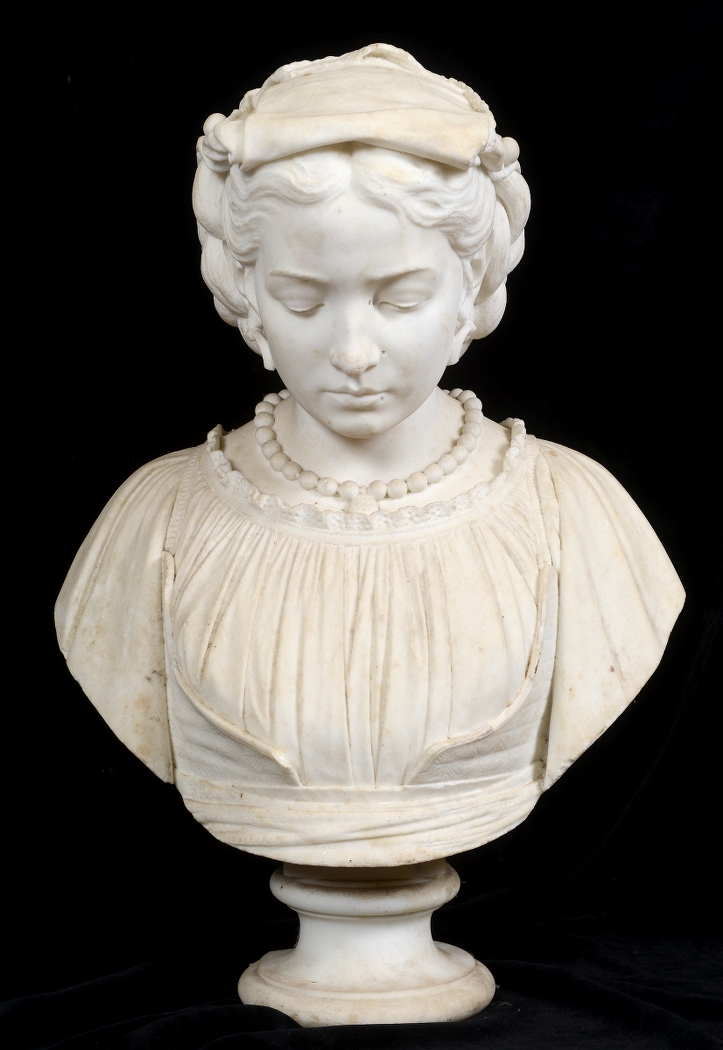 The contents of a Somerset cottage, entered into the Charterhouse March 14th & 15th auction, has revealed a lifetime obsession of collecting. 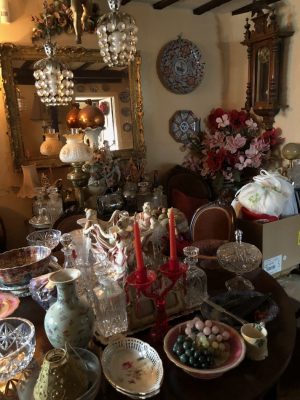 “The owner, who passed away recently, has clearly never heard of the phrase Minimalism.” Commented Richard Bromell. “Having worked in auctioneering for nearly 35 years, this property is one of the fullest I have seen on my travels and although no one particular item is of high value, collectively all the lots will mount up to a substantial sum incredibly quickly. It is a fascinating cottage contents telling the history of the owners collecting obsession.”

There were thousands of pieces of pottery, porcelain, glass, pictures, furniture, silver, jewellery, books, dolls, copper, brass, items of militaria. Every surface, including the walls and kitchen work tops, housed and displayed the owner’s treasures.

In the dining room, which was dimly lit by two low wattage bulbs, there was hardly anywhere to stand let