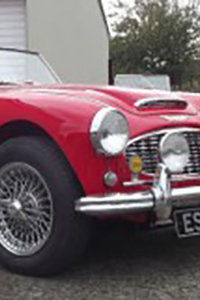 We have been holding classic and vintage car and motorcycle auctions for 18 years. What originally started out with one auction a year has grown to one off auctions of collections, and eight specialist sales every year. These include three auctions at the popular Footman James Car Shows at the Royal Bath and West, and our Auction at the Sherborne Classic and Supercar Show at Sherborne Castle.

Over the years we have sold millions and millions of pounds of cars and motorcycles, and one classic car auction totalled just under £500,000. The July Auction at Sherborne Classic and Super Cars has entries totalling over £1 Million. Highlights of the vehicles we have sold are an Aston Martin DB6, which was garaged stored near Reading and having not turned a wheel for over 30 years, for £150,000, a fabulous Rolls Royce Phantom II Sedanca de Ville £88,000 and a Mini Cooper S, from a deceased estate near Leicester, which was original but in a poor condition for an amazing £33,000.

All of our auctions use live internet bidding platforms to ensure that every lot, whether it is worth £20 or £500,000, reaches the widest possible market and sells for the best price possible. In the run up to an auction we receive 100’s of emails requesting further information for lots in the sale. Attached to these email replies, we regularly send well over 1,000 digital images, such is the huge interest generated in our auctions.

Ultima is an Ultimate Car

An Ultima GTR, which cost its owner over £70,000 to build, is entered into the Charterhouse auction of classic and vintage cars on Sunday 10th February.

“It really is a super car in all respects.” Commented Matthew Whitney. “With its purring or rather growling V8 engine producing over 400 bhp fitted in a car weighing less than 1,000 kg, it has a suspected top speed of 200 mph and a 0-60 mph time in just a few seconds.”

Ultima produced the GTR until 2015. It is a mid-engined rear wheel drive super car with a steel space frame chassis. An Ultima GTR was taken around the Top Gear test track lapping at 1 minute 12.8 seconds, which was at least 1 second faster than all other times listed on the Top Gear Power Board at the time.

Do you have an item or items you wish to have valued or sell?
Please contact us, or telephone us if you prefer.
If you decide to sell your items through Charterhouse we would be delighted to help.

Richard Bromell has over 30 years of experience within the auction world. He originally started work in The Long Street Salerooms when it was owned by Phillips. Since then, he has worked for numerous firms of auctioneers from Bearne’s in Torquay up to Tennants in Yorkshire.  If you call the office to arrange a free home visit, then it will probably be Richard who will see you at your property.  Since the 1990’s, Richard has been involved in numerous antiques television programmes including Going for a Song (with both Michael Parkinson & Anne Robinson), Going, Going, Gone, Antiques Treasure Hunt, Antiques Road Trip and Flog It!  In 2003 and 2004, Richard was nominated as one of the top four auctioneers in the country at The British Antique & Collectors Awards (BACA). This was the first time an auctioneer has been nominated for two consecutive years.  What do you love about running Charterhouse? “The huge variety of items I see every day, from silver to medals. Every day is like Christmas, you never know what you are going to see!”

Opening Hours
We are open from Monday to Friday 9.00 am to 5.00 pm.
Please come to the saleroom at any time for a free verbal valuation.
Viewing for antique auctions Wednesday 10 am to 6 pm and Thursday 10 am to 5 pm during sale week.
Antique Auctions start at 10 am on Friday with viewing from 8.30 am until 9.45 am.
There is limited viewing during the sale.
Viewing days and times vary for car sales.
Please contact the office for details

Due to current covid-19 restrictions, our normal service is slightly restricted.

From The North Leave the M5 at Junction 25 and follow signs for Yeovil and then Sherborne. Sherborne Castle is on the South East side of the town.

If you are thinking of staying in the area, the telephone number for

accommodation we have recommended in the past, in order of proximity, includes;

previousAntiques Sale Results
nextWhat type are you?
Tweets by CharterhouseAV