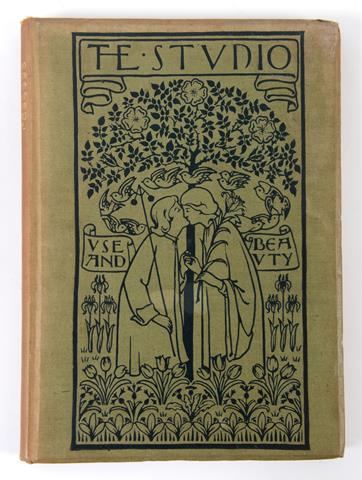 A collection of art related books from the library of Sir Arthur Lasenby Liberty, founder of one of London’s best known shops Liberty & Co in Regent Street, are going under the Charterhouse hammer in their auction on Friday 19th January.

“The name Liberty is synonymous with design and the books from the library are a good run the popular arts books called The Studio Magazine.” Commented Richard Bromell. “The Studio Magazine was founded in 1893 by Charles Holme who had previously travelled with Sir Arthur and his wife through Japan and America so it is not entirely unsurprising that Sir Arthur collected the books from volume I in 1893.”

The Studio Magazine was international in scope and promoted the work of new art artists, architects and designers. The books going under the Charterhouse hammer are mostly bound to match and run to 111 volumes, albeit with the occasional missing volume, and are estimated at £600-1,000*. END_OF_DOCUMENT_TOKEN_TO_BE_REPLACED